At the same time that the U.S. government maintained that cannabis was an illegal drug with no medical value the U.S. Department of Health and Human services took out a patent on “Cannabinoids as antioxidants and neuroprotectants.” This apparent hypocrisy is the result of scientists and politicians having very different agendas. The patent was awarded to the Department of Health and Human Services (HHS) in October 2003.  It was filed four years earlier by scientists who worked at the National Institute of Mental Health (NIMH). 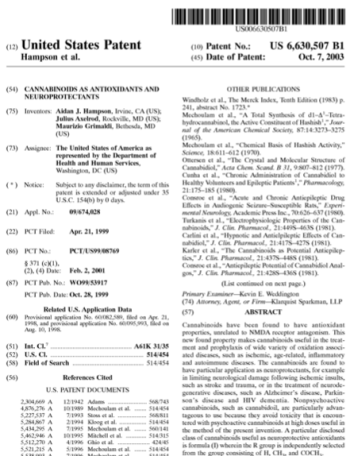 In the U.S. a new use for an existing product that is “new, useful, and non-obvious” may be patented. In theory the patent holder can claim exclusive use of the product for that “use” and charge people money to license it. When government employees apply for a patent for work that they did during their work hours the government gets the patent. In some cases they are allowed to share in some of the profits from the patient in a limited way. Aidan Hampson, Julius Axelrod, and Maurizio Grimaldi saw promise in CBD and THC 20 years ago.  In their patent filing they wrote that:

“Cannabinoids have been found to have antioxidant properties, unrelated to NMDA receptor antagonism. This new-found property makes cannabinoids useful in the treatment and prophylaxis of wide variety of oxidation associated diseases, Such as ischemic, age-related, inflammatory and autoimmune diseases. The cannabinoids are found to have particular application as neuroprotectants, for example in limiting neurological damage following ischemic insults, Such as stroke and trauma, or in the treatment of neurodegenerative diseases, Such as Alzheimer’s disease, Parkinsons disease and HIV dementia. Nonpsychoactive cannabinoids, Such as cannabidoil, are particularly advantageous to use because they avoid toxicity that is encountered with psychoactive cannabinoids at high doses useful in the method of the present invention.” 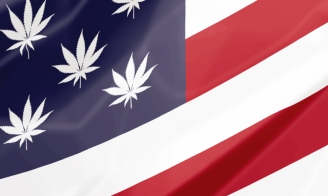 Since that time cannabidiol (CBD) has been shown to be a neuroprotectant and to have powerful anti-seizure properties.  THC has been found to dissolve beta amyloid plaques in the brain, one theorized cause for Alzheimer’s Disease.

Will the government try to collect their money?  I guess that’s theoretically possible, but it’s hard to square this obvious acknowledgement that cannabis has value with the continued prohibition at the Federal level.  Some people in the government knew about the medical value of cannabis 20 years ago.  How come they didn’t tell the rest of us?

I work in a health profession and I am interested in CBD from a professional and personal point-of-view. View all posts by cannabispharmacy

This site uses Akismet to reduce spam. Learn how your comment data is processed.